In May 2018 we had the first large scale run of our brand new crisis game for teams. As part of an innovative teambuilding day, 60 team members from the ‘Webcomm’ units of the European Parliament joined Tim Van Achte, Mike Lauder and me (Robbert Meulemeester) in Brussels to save the world in an apocalyptic and chaotic scenario. Not only did we have lots of fun, as expected we also recognised many actual crisis management challenges about awareness, coordination, communication and team dynamics. In this blog post I’d like to share a few (already legendary) quotes of the day.

Prelude for the game: Since May 2014 we know that the US Department of Defence wrote in 2011 “CONPLAN 888”. It’s a crisis preparedness plan, but it is unlike any other crisis plan you have heard of: CONPLAN 888 prepares the Pentagon and the US Defence forces for zombie outbreaks! In its extensive risk assessment section, the document covers pathogenic zombies (classic zombie type that is created via infection), but it also covers special measures to be taken for less known species such as space zombies and even chicken zombies. Today, however, we are not dealing simply with a predefined plan to organise communication in any unanticipated crisis, like the Pentagon did in this project back in the days. Today, the exercise of that day is actually turning into a reality! Today, we are actually confronted with this unanticipated event, normally only regarded as the scope of a blockbuster scenario.

Imagine the following scenario. Multiple zombie outbreaks unleash havoc across the world. Our planet’s largest cities have been immobilized and large groups of dangerous zombie creatures pose unforeseen threats to anything we hold dear. In this interactive and fun crisis game, participants take on a list of challenging tasks in order to save the world. They can positively influence the overlying goals with their actions but they will have to work closely together, get their priorities straight and use their resources wisely in order to mitigate the zombie threat on an strategic, operational and communicative level. 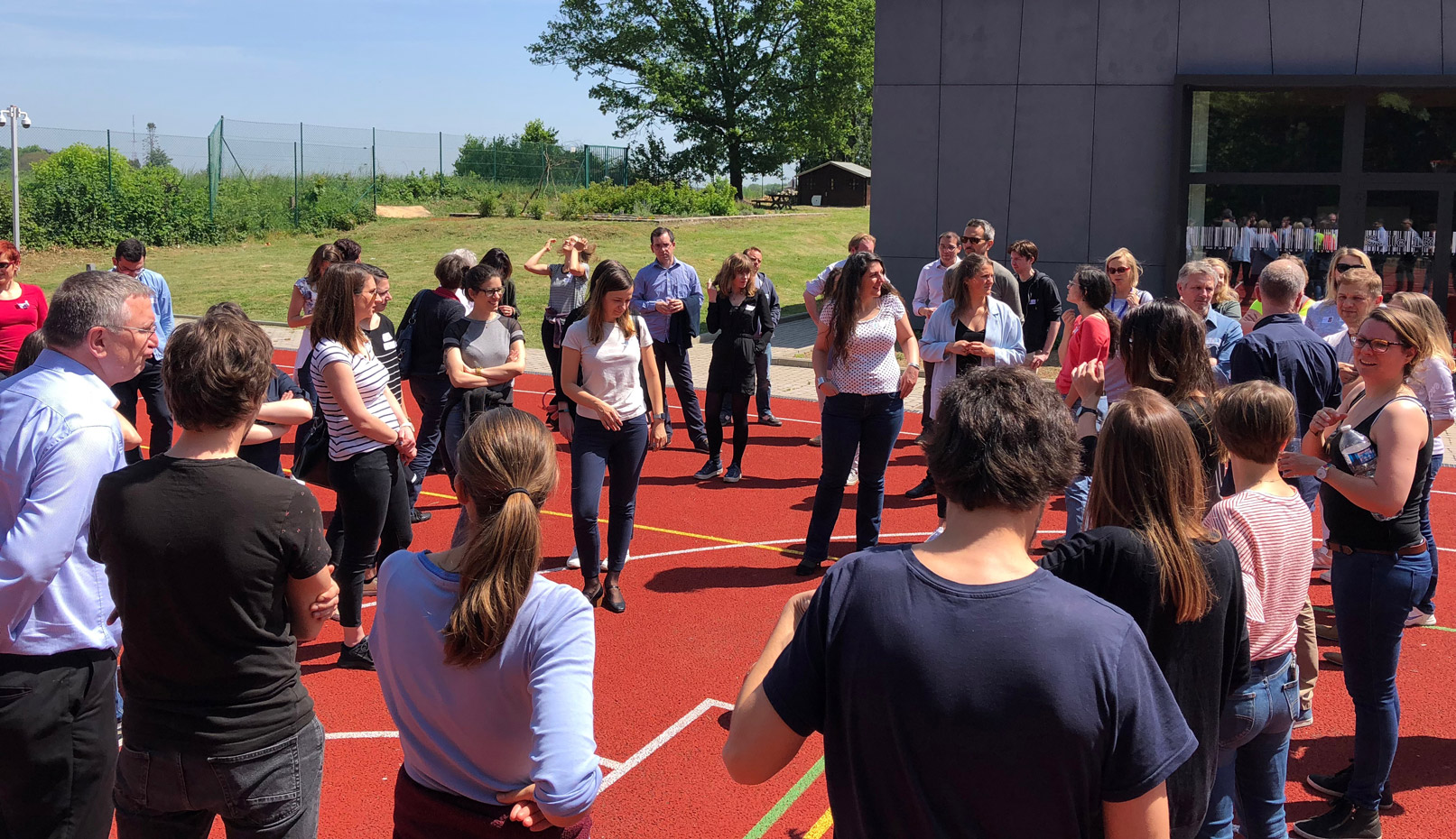 Designed as ‘serious game’, the game has the purpose of training leadership competences. It exposes shortcomings regarding strategic thinking, tactical planning and more, after which instantaneous in-game adaption and learning can occur. The background of zombie outbreaks offers participants a setting of complex situations: because of the zombie topic, complexities and team decision processes become highly discussable. Innovative thinking is stimulated: teams enhance their reaction, anticipation and resilience capabilities. It was great to see how participants immersed themselves in the scenario and went all-in to save our planet (even if nuking ’em was unavoidable). This led to more than a few memorable quotes I took away from the game.

“Go mediocre or go home!”
At one point, the team on the Battlefield wanted to fight recklessly. The only problem was that they had no currency (called ZombieCoin in our game) at the time this quote was uttered. As a result, they went from “Go hard or go home!” to “Go mediocre or go home?!” in a mere few seconds. Funny and realistic. You see, in our crisis game, as in real life, teams count on the War Room for budget to execute the needed actions (in our game, the War Room is a different group of people in a different room, occupied with defining strategic outlines). It is not guaranteed that the War Room (or Crisis Management Team) will simply provide unlimited budget for Zombie counterattacks though. Sometimes you’ll have to work with the limited budget available.

“So we’ve established that we screw the Mars Colony and Amsterdam?”
In our game, zombie outbreaks unleash havoc in nine major cities and the Mars Colony (a flourishing community considered one of the world’s heavily populated areas – we took the liberty to set our game  in 2043!). The design of zombie outbreaks makes it nearly impossible to mitigate all zombie threats in all cities. Budget and time is too limited. When it became apparent that the Mars Colony and Amsterdam were doomed at one point, the team decided to give up those cities and stop all rescue attempts there. Which was duly noted by one Dutch player that loved Amsterdam. You win some, you lose some.

“My morals are questionable, so don’t ask me!”
The Battlefield teams were in charge of fighting the zombies worldwide. Instead of going rogue I urged them to respect the strategy set out by the War Room. In the War Room, players have a global overview at all times (which we do not have in the Battlefield). The War Room is responsible for creating a long term strategy based on simple values and principles. When our teamleader was asked if she agreed with the imposed strategy, she laughed out loud and said “My morals are questionable, so don’t ask me!”. It was great to see that the absurdity of the game made key crisis concepts such as ‘crisis strategy’ more discussable for everyone.

“There is no last round in a real crisis!”
Dr. Mike Lauder really hammered home some great points during the debrief. Our game is played in rounds, that are synchronised in three separate teams/rooms: Battlefield, War Room and Global Alert Network. At a certain point near the end of the game, we, the three Zombie Leaders conducting the game teams, announce to the participants the last round. Instantly, all players started to take much more risk, resulting in both good and bad outcomes. Strategies and tactics suddenly changed to very short term as players conclude that there would be no next rounds. As Mike made clear though, in a real crisis situation you never know whether there is a next round or not. Act accordingly. A good crisis manager is always prepared for a new escalation or change of context, even when the end of a crisis is clearly within sight.

Curious to see how your teams would handle the 2043 Zombie apocalypse? Ready to improve your team’s awareness, dynamics, coordination and communication skills during a fun yet challenging activity, far away from any desks and devices? Don’t hesitate to contact Robbert via robbert(at)pm.be!

About the author
Robbert Meulemeester is a crisis adviser and strategist at PM • Risk Crisis Change. At PM he developed the Zombie Game. Robbert is addicted to American football, riding roller coasters and running.