As our blog post introducing Mike and Julien is still being crawled by Google, we are proud to once again announce two new team members! Kim De Raedt and Pieter-Michiel Vermaut have recently joined PM to help us providing our range of services to a growing number of clients. As Kim and Pieter-Michiel have entirely different backgrounds, Robbert bombarded them for this article with 10 questions about themselves.

Tell us a bit about yourself?

Kim: Allow me to summarise here! I studied journalism and started my career as a journalist with a regional broadcaster. After that I moved to Het Nieuwsblad (one of Begium’s biggest news outlets), where I eventually became the coordinator of the website and social media. Needless to say, I spent lots of early mornings and late nights at the office. Wanting to spend more time with my family, I said goodbye to my career as a journalist and started working for the city of Ghent as a part of the press team. Since nobody was responsible for crisis communications, I volunteered to take that on me! To gain some expertise, I became a member of TeamD5 and immediately fell in love with the craft. To be able to work on crisis management and communications fulltime and to inspire others is a dream come true. In my spare time I’m a certified diver. And being born and raised in Ghent, I’m a proud Strop of course!

PMV: I recently finished my postgraduate disaster management at Campus Vesta, where I got in touch with PM freelancer Tim Van Achte. He gave a lecture about crisis intelligence and crisis processes and I got fascinated right away. During my professional career I was always interested in how teams work together, or how we can find the information that we are looking for. Tim and PM made me realise the answer is in the process, and not in a ready-made answer. But actually, looking back on my life, the fascination for crisis management has always been there. At 18, I wanted adventure, I wanted to discover the world. I wanted to help people, in any way possible. And that’s how I ended up with the military. It’s an experience I cherish and will carry for a lifetime. From the military I went to a special unit of the Federal Department of Justice, and in the meantime I expanded my knowledge by taking up some courses. I even became a prevention advisor and emergency planning coordinator in Aalter, but I wanted to expand my horizon. That’s exactly why the PM environment suits me so well.

Which areas of crisis management or crisis communications are you most interested in?

PMV: Adding to that, I would say I aspire to have an impact on organisations during a crisis and, as a result, positively impact the outcome of the situation too. Impact by helping people is what matters most to me.

What will you be working on at PM?

Kim: I have a quite broad background in crisis communications so that’s the area of ‘the Golden Triangle’ that I’m going to focus on for now. Additionally, I’m going to take up our own communications strategy as an agency and I’ll be the main contact person when it comes to our social media simulator ‘CIP Simulator’.

PMV: That’s quite a broad question, which is why my answer is also not very specific! In general I look forward to changing the way organisations look at crisis management, but also topics like health and safety. In contrast to Kim, and because of my background as emergency planner and prevention advisor, my strengths lie in the operational field.

If you could live in a video game/book/movie, which one would it be and why?

Kim: Hmm, that’s a tough question. Since science fiction and space travel have always been a guilty pleasure of mine, I guess I would like to be main character of Interstellar. (Cooper, played by Matthew McConaughey). He leaves the earth and leaves behind his family in a search for new habitable planets for future generations. Is there anything more altruistic? Additionally, the idea that ‘someone is out there’, intrigues me tremendously.

PMV: The Matrix, because you have to choose between exploring the brutal truths of reality, or continuing to believe in an illusion.

How would your 10-year-old self react to what you do for a living?

PMV: When I was 8 years old, I was a real adventurer. Once I got missing for several hours after I went exploring during a summer camp, just my mother forgot to pack my swimsuit. There was a big police search in several municipalities at the Belgian coast, everybody was looking for me, haha! So I think my younger version would be really excited about the challenges and variety I face today.

Kim: I didn’t have a career plan at the time, I couldn’t choose. Ortopedic surgeon, stewardess on an airplane just to see the world, or becoming a lawyer? Nearly every branch crossed my mind. But never crisis management. I guess I didn’t know such a job could exist.

Do you live by any piece of advice or motto?

PMV: I despise the motto “What has to be done, has to be done” I heard in the army every day. So now I live by “Give and you shall receive”.

Kim: “Don’t make mistakes from someone else, there’s plenty of choice”. Because for me, that means it’s OK to make mistakes, but at the same time you can learn from your mistakes or those of others.

What is your hidden talent?

Kim: Diving, either in Belgium or abroad. And touch typing. (A quick test at the office showed I typed nearly twice as fast as Robbert, and he’s not particularly slow!)

PMV: I love practicing all kinds of sports (but mostly running or triatlons).

What’s your most annoying habit?

Kim: Typing very loud, but I guess that’s a result of the touch typing. J

PMV: I tend to have these crazy ideas that I try to convince everyone of.

When was the last time you said “I love/like you” to someone (not your wife or kids).

PMV: Well I didn’t actually say I loved him, but last weekend I showed a lot of appreciation to an ex-colleague of mine. He started a new company, and I told him it was a nice idea and that I was proud of him. Does that count?

Kim: Yes of course that one counts! It doesn’t have to be the L-word, but I think we say it way too little. It’s as if it goes against our Flemish nature. But then again, everybody loves to hear it. So I make it my duty to express my feelings towards friends or family as often as I can.

Let’s say we do this interview again in ten years time, and we’re drinking champagne. What are we celebrating?

PMV: PM has experienced an enormous growth rate between the gas explosion in Ghislenghien and today. If our company can keep on growing and innovating like that, that alone is worth celebrating.

Kim: I second that. PM is dreaming about taking over Europe in a couple of years. Well, in ten years time we should’ve reached all continents. So I guess the bottles would pop because I just got promoted to Chief PM Down Under!

About the author
Robbert Meulemeester is a crisis adviser and strategist at PM • Risk Crisis Change. At PM he developed the Zombie Game. Robbert is addicted to American football, riding roller coasters and running. 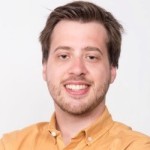